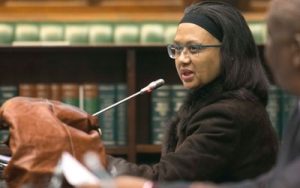 Morality shut out of energy debate

How ironic! As I walked into the parliamentary energy portfolio committee meeting in my episcopal shirt and collar, I heard an African National Congress MP saying, “I don’t know why theologians express views on nuclear. They don’t know anything about nuclear energy and should stay in their churches”, or something to that effect.

What an extraordinary and tragic statement. No wonder our beloved country is in its present state — keep morality and ethics out of public life; keep the theologians in their churches “doing their job”.

This is precisely what the apartheid regime used to say to Archbishop Desmond Tutu.

How we spend our money is a highly moral issue. Yet our present world says it’s all okay as long as it makes money and provides industry with energy, regardless of the consequences for people and the natural environment. But it is actually immoral to leave a legacy of waste to future generations.

At the committee hearing, Energy Minister Tina Joemat-Pettersson perpetuated the myth that only coal and nuclear can provide baseload electricity. That is no longer the case. SA has the best renewable energy resources in the world. Renewable energy generation can be up and running within a year or two. It is widely known that, with thermal batteries, electricity can be generated around the clock. It is also known that when the sun is not shining, the wind is frequently blowing.

Living in harmony with this planet, our only home, is a priority for our future survival. I would hope that the government recognises that building the economy at the expense of the natural environment is a recipe for disaster. We theologians, who include Muslim, Buddhist, Baha’i, Jewish as well as Christian, have tried to meet the government over the question of our energy needs. We will happily do so if the government makes the opportunity and is prepared to listen as to why this is such a deeply moral issue.