Yesterday, the Southern African Faith Communities’ Environment Institute (SAFCEI) and Earthlife Africa Johannesburg (ELA-JHB) issued letters to the Ministers of Energy and Public Enterprises, Eskom and the National Energy Regulator of South Africa (NERSA). The organisations have called on Minister Mahlobo and Eskom to immediately halt the nuclear tender process, as outlined by the judgement decided in the Western Cape High Court in April 2017.

This urgent call is underlined by the High Court judgement, which holds that any decision made by South Africa’s Minister of Energy about new electricity generation, must be done in conjunction with NERSA, through a lawful and procedurally fair Section 34 determination. This determination would have to specify why new nuclear energy electricity generation is needed so urgently and what percentage of South Africa’s energy mix it would fulfill.

According to Liziwe McDaid of SAFCEI, current news reports which highlight the Minister of Energy David Mahlobo’s unexplained fast-tracking of the Integrated Resource Plan (IRP) by 4 months at the expense of clarity and certainty exacerbate concerns about the process. In circumstances where the Minister of Finance Malusi Gigaba stated that that the South African economy cannot afford nuclear currently, nor does the country need new intensive energy production, Eskom’s readiness to commence the nuclear tender process immediately upon IRP approval is cause for alarm.

“We cannot ignore the many serious allegations of state capture and irregular procurement processes by senior Eskom officials at the parastatal which is currently under scrutiny by Parliament’s Public Enterprises Committee,” says McDaid.

Makoma Lekalakala of ELA–JHB says that the High Court decision emphasises public participation as part of the Section 34 determination processes. “Clarity and transparency is needed with regard to procurement of energy and its related processes, including the negotiation or renegotiation of International Governmental Agreements (IGAs).”

Should Eskom not provide this undertaking by Monday 13th November 2017, SAFCEI and ELA-JHB will assume that Eskom is determined to go ahead without following legal and constitutional Section 34 determination. An urgent application to the High Court may be sought as urgent relief to ensure that the High Court judgment is respected and that government acts openly and transparently. Both SAFCEI and ELA-JHB are members of a Campaign for a Just Energy Future, a national movement geared at mobilising South African citizens to hold government accountable for its energy decisions

Issued by Erna Curry and Natasha Adonis, on behalf of SAFCEI and ELA-JHB. 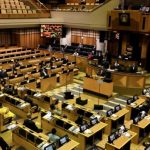