Today, the Southern African Faith Communities’ Environment Institute (SAFCEI) and the Campaign for a Just Energy Future (CJEF) joined a number of civil society organisations to discuss the way forward, following the deliberate exclusion of civil society in the Minister of Energy’s rushed energy indaba, planned for tomorrow and Friday (7-8 December).

According to SAFCEI, the short notice indaba does not fulfil the Western Cape High Court’s ruling regarding meaningful participation in the nuclear court case – since it was announced just more than two weeks ago, it was only accessible by invitation, and therefore not open to the public or various concerned civil society organisations.

In November, Energy Minister David Mahlobo told parliament that the energy plan will have nuclear energy even though the draft released for comment in 2016 found no need for nuclear energy.

There is overwhelming evidence that it is too costly and also unnecessary. In addition to this, a study published by Eskom further reinforces that there is no rational case to support nuclear.

According to Pooven Moodley, Campaign Coordinator for the CJEF, the number and nature of the organisations excluded from the invite list is serious cause for alarm and feels like a strategic manoeuvre to wilfully exclude those citizens who oppose nuclear.

“While the Minister says that SA will take on nuclear at a rate and pace the country can afford, he is unwavering in his desire to keep it in the plan. It is unclear whether Minister Mahlobo’s intentions are questionable and linked to #StateCapture claims or whether his insistence on nuclear has to do with his naivety in the role of Energy Minister,” says Moodley.

Liz McDaid, SAFCEI’s energy expert says, “SAFCEI was NOT invited, tried to register and at the last minute, after the minister expressly told civil society organisations that the meeting was not for civil society and was by invitation only, suddenly responds saying we can come. This makes no sense, and it seems that the minister is playing games.”

We are serious about engaging with lawful processes as set out in the April 2017 court judgement, which ruled the nuclear deal unlawful and unconstitutional, and ordered government to follow a process of public consultation over any proposed nuclear deal. This indaba is definitely not part of any real consultation.

Earthlife-Africa Johannesburg (ELA-JHB) was also not invited to the indaba. ELA-JHB’s Makoma Lekalakala says that in Parliament this quarter, the Portfolio Committee on the Environmental Affairs was briefed on coal-related pollution and Eskom is currently being drilled on its corporate governance, with members of the public and civil society presenting.

“However, the Portfolio Committee on Energy has been deadly silent and no civil society organisations have been asked to share their views on the nuclear deal, which seems to be strongly associated with the ongoing corruption in the country,” says Lekalakala.

Lydia Mogano, SAFCEI’s Regional Coordinator in Pretoria says, “The upcoming energy indaba is an epitome of how our government continues to undermine the voices, rights and values of its citizens, and this is disappointing.”

Right2Know Campaign’s Vainola Makan says that R2K is abhorred by the closed-door approach to the energy indaba and the fact that key civil society organisations in the energy sector have not been invited to the campaign.

Says Makan, “We would rather have the government spending money on a clear, transparent inclusive process of consultation of all sectors involved.”

In October, SAFCEI and 40 other organisations – under the banner of the National Campaign for a Just Energy Future (CJEF) – sent a letter to the PCE chair, Fikile Majola, demanding that Parliament also have hearings on energy justice.

“We approached the chairperson to ask what happened to our letter to Parliament, but he did not even have the courtesy to table the letter to the Committee. We asked for the chance for civil society to put our views before the end of November. However, with Parliament has just about closed, the Chair has said that he might have public hearings next year. Sadly, Parliament has failed the people of South Africa in this matter,” said Zainab Adams, Outreach Coordinator at SAFCEI.

Shu-Aib Appleby from the Muslim Judicial Council – a member organisation of SAFCEI – says, “As faith leaders, our appeal to our faith-conscious and strongly grounded political leadership is that they uphold their oaths of office with the truest of commitments. This means stopping any process to conclude the nuclear deal until there is due public participation, as prescribed by the Constitution and Parliamentary procedure and to make all information available to its constituency, the South African Nation. We also call upon the government to publish its reports on any steps taken on the Integrated Resource Plan (IRP) and procurement. We have the right to know.”

Andy Pienaar, Coordinator of the Namaqualand Action Group for Environmental Justice and representing a community affected by nuclear waste in the Northern Cape, and who were also not invited to the indaba adds, “We are tired of the empty promises. The chairperson promised, when we came to parliament last year, to have public hearings. But, it is now a year later and no public engagement has happened, yet now they hold indabas without us. The PCE and its chairperson have failed us.”

“How can Parliament hold the Executive to account if it is not prepared to listen to civil society? We have so much valuable information which can be used to challenge the Executive,” says Pienaar.

Issued by Natasha Adonis, on behalf of SAFCEI. For more information, contact Natasha on 0797-999-654 or adonisnatasha@yahoo.co.uk. 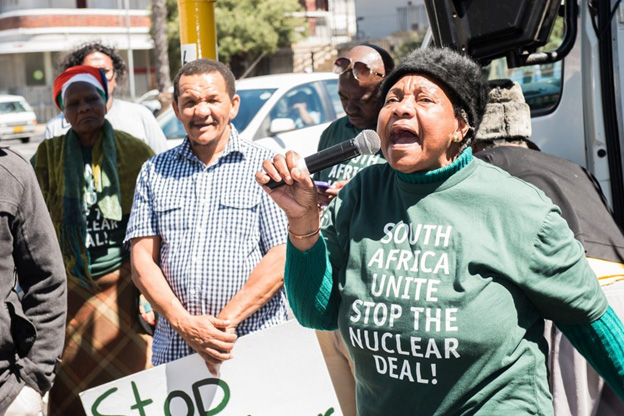