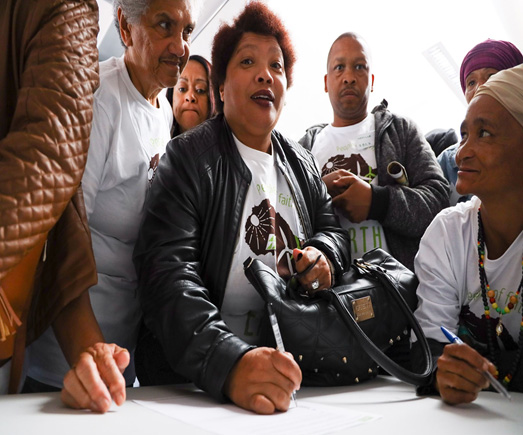 Yesterday, the Southern African Faith Communities’ Environment Institute (SAFCEI) ended its first-ever People’s Power Learning Festival – a grassroots education workshop, aimed at empowering faith leaders and communities to ensure meaningful public engagement on energy issues – with a demonstration at Parliament. From the festival, an open letter to the Portfolio Committee on Energy (PCE) was drafted and signed by participants, challenging the Executive to fulfil its function to provide oversight and holding officials accountable for poor decision-making. The letter will be delivered to the PCE on Friday.

According to Vainola Makan, SAFCEI’s Energy Justice Coordinator, the letter highlights a number of issues of public concern, such as why the PCE allows the pro-nuclear lobby to give questionable input, while those fighting for energy justice are not afforded the opportunity to challenge their claims. The letter also highlights the lack of accountability from previous officials who were responsible for massive wasteful spending of taxpayer money on a nuclear deal which was ruled unlawful and unconstitutional in court.

“In 2016, the Department of Energy (DoE) reportedly paid over R212 million on contracts in preparation for the nuclear deal. The largest payment was for R171 million (at a rate of R1.7 million per week) paid to “Central Lake Trading 149”. But, since the deal was illegal, it is important for our democracy, that the officials responsible for motivating or awarding unlawful contracts such as these, should be disciplined, because they may still be in decision-making positions within the DoE or elsewhere in government, and still making such poor decisions,” says Makan,

Adds Makan, “Further to this, the recent Medium Term Budget Statement (MTBS) included an additional amount of R59 million for “services associated with the nuclear new build programme”. Yet, as is clear from the draft energy plan, there is no new nuclear build programme. Why then, does the budget still include funds for new nuclear?”

According to Peter Becker, from the Koeberg Alert Alliance, other issues include the bailouts to State-Owned Enterprises (SOEs), such as the R40 million paid to the National Nuclear Regulator in 2017.

Says Becker, “Since the Nuclear Energy Corporation of South Africa (NECSA) is broke and will require a bailout from National Treasury (some of which may be included in the R59 million mentioned above), has the PCE looked into whether there is any continued need for NECSA to exist?”

“On another note, the CEO of Nuclear Africa (Pty) Ltd – a private company offering consultancy services in the nuclear sector – is also currently the chair of the NECSA board. Dr Kelvin Kemm regularly appears before the PCE making outlandish claims about how wonderful nuclear is, with not a single word about its shortcomings. This is a clear conflict of interest – when the Chair of the Board of an SOE is also the CEO of a consultancy company in the same field,” he adds.

“Nuclear waste is another cause for concern. When it comes to low and medium level waste – which is transported by truck from Koeberg to Vaalputs in the Northern Cape, and buried – we need to know what emergency planning is in place to address the risk of contamination in the event of a road accident on the way. As the route goes through some very remote areas, emergency vehicles such as fire trucks, could take several hours to reach the accident site, and the impact of a burning truck loaded with radioactive waste could be quite far reaching and severe,” says Becker.

In the case of high level waste – which is stored on site at Koeberg and has accumulated at a rate of about 30 000kg per year, to the current level of about 1.5 million kilograms – disposal is the responsibility of the National Radioactive Waste Disposal Institute (NRWDI), which was formed in 2010. However, by 2016 the NRWDI was not yet operational.

“It therefore seems irrational that South Africa invests in new nuclear power stations when they have not made any progress on waste disposal from the existing nuclear power station. The question is, can Eskom afford the costs in the event of an accident at Koeberg? Eskom has insurance up to the limits of its liability, which is a small fraction of the property damage and loss of value resulting from a major accident at Koeberg in Melkbosstrand alone. But, this money would need to come from somewhere, potentially an added burden on treasury and taxpayers,” says Becker.

Civil society organisations have been asking the PCE for a hearing for years, to discuss these issues, but this has not happened. And, while it’s great that we got the opportunity to be heard during the IRP hearings, that was unfortunately not the correct space for the in-depth discussions that the nuclear issue requires.

Francesca de Gasparis, SAFCEI’s Executive Director says, “Our letter therefore requests an opportunity to engage the full PCE on these matters, particularly since we have noted most of the MPs on the committee appear to have little knowledge of the risks of nuclear energy and have only spoken of the benefits. These are people who should be acting in the public interest, but how can they if there is bias or a lack of knowledge?”

Issued by Natasha Adonis, on behalf of SAFCEI. For more information, contact Natasha on 0797-999-654 (on WhatsApp). 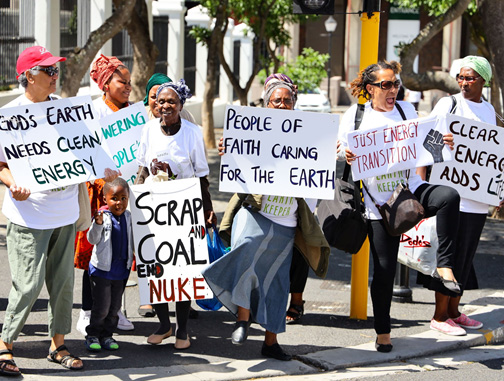 SAFCEI’s Letter to the PCE