The Southern African Faith Communities’ Environment Institute (Safcei) recently made a number of requests for information in terms of the Promotion of Access to Information Act (PAIA), following its growing concern about government’s latest push for further nuclear energy projects. According to Safcei’s Francesca de Gasparis, it is the public’s right to have access to key information – such as all the potential costs – about proposed projects which could have harsh implications for them.

Government has recently released draft regulations to enable the extension of the plant life of the Koeberg Nuclear Power Plant. The plant was meant to close in 2024, but should these regulations be adopted, Eskom will be able to apply for a license to keep Koeberg going for an extra 20 years. The proposed extension is included in the 2019 Integrated Resource Plan (IRP2019).

“In South Africa, energy is already a struggle for many women in their daily lives, who are unable to afford electricity. It is women who are most affected in times of crisis and the government’s current plans will continue to affect their future access to affordable power. It is therefore important to consider the bigger picture and how these decisions affect the most vulnerable in our society,” says de Gasparis.

She says, “That is why is important that the people of South Africa should know all the possible cost implications of extending Koeberg’s plant life. We need to see any studies – such as the business case or cost-benefit analysis – in order for us to determine whether there might be better ways to spend the money to generate electricity, other than extending an aging plant which is located in such close proximity to the country’s second most populous metro. To this end, Safcei has submitted information requests to various government departments asking that these documents be made publicly available.”

“The Constitution provides for the right of access to information by the public and the media. Section 32 of the Bill of Rights states that “everyone has the right of access to any information held by the state and any information that is held by another person and that is required for the exercise or protection of any rights”. It is the public that funds Eskom, through tax contributions and payment for electricity. To keep the public in the dark, further deepens mistrust in the government and its motivations,” says de Gasparis.

In addition, the Department of Mineral Resources and Energy (DMRE) is simultaneously exploring, once again, whether to bring more expensive nuclear energy back to the table. Funds have already been allocated to investigate small modular reactors (SMRs).

“In 2014, Safcei made a number of PAIA applications for information regarding proposed nuclear energy deals. At the time, Treasury admitted that they had not given any input into the financial implications of any nuclear deals. This was a major concern for Safcei and our multi-faith members. How could South Africa enter into any international agreements without thoroughly doing their financial homework first?” she adds.

“Safcei has made these requests for information because we are concerned that government is once again rushing head-first into costly capital projects, without doing its financial homework and rigorous project assessment. If the financial implications for extending Koeberg’s plant life are clear, then the public, who pay for it, have a right to know exactly what these are,” concludes de Gasparis.

The deadline for comment on the Koeberg Nuclear Power Station extension regulations is 18 August. South Africans are encouraged to submit their comments at https://dearsouthafrica.co.za/nuclear-regulator-act/. For more information, go to http://nuclearcostssa.org/ or find us on Facebook. #JustCleanEnergy #NukeFreeSA #NukeFreeFuture 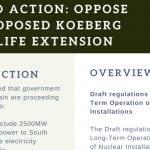 Have your say on the proposed amendments to the Regulations in the National Nuclear Regulator (NNR) ActNews, Submissions 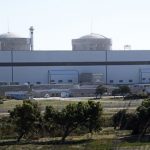