Civil society organisations (CSOs) are continuing their efforts to help South Africa move towards the end of load shedding by drafting the People’s Determination. This proposed document will assist the minister of Mineral Resources and Energy, Gwede Mantashe, to issue a section 34 determination for the balance of renewable and storage capacity contained in the Integrated Resources Plan, finalised in 2019.

On 6 July, a group of 16 CSOs sent out an urgent call to the Department of Mineral Resources and Energy (DMRE) Minister, Gwede Mantashe, asking him to issue a section 34 determination to allow immediate commencement of building all renewable energy and storage capacity provided for in the Integrated Resource Plan (IRP) of 2019.

This call was answered with silence, and it was followed up with a letter to President Ramaphosa asking him to instruct the DMRE to issue such a determination. While the non-responsiveness of the DMRE was disappointing, the organisations were pleased to hear the President in his speech on 25 July announce that he will instruct the minister to do exactly what they had requested.

As a response to the President’s recent call for all of South Africa to contribute to solutions where they can, the proposed People’s Determination is offered to assist the Minister to promptly fulfil his duties in terms of the Electricity Regulation Act, by drafting the determination for him and his department.

The contents of the People’s Determination are an accurate reflection of the new generation capacity planned for in the IRP 2019 and was written after wide consultation with energy experts and civil society groups.

Historically, the DMRE has often been slow to act, including processing instructions from the President, as was the case when there was a delay in issuing the 100MW exemption for electricity self-generation.

A growing list of civil society organisations and independent experts are requesting the President to present  their People’s Determination to the Minister of the DMRE with a view to it being used as a basis for issuing a formal section 34 determination. If the lack of generating capacity is to be addressed, this determination must be completed and presented to the National Energy Regulator of South Africa in an expedited process.

In addition to addressing at least a part of the shortfall in generating capacity this determination will also stimulate local manufacturing and create sorely needed jobs in the renewable technology sectors.

The civil society organisations are extending a unified invitation for any further engagements with the President and/or any relevant government stakeholder(s), including the Minister and the DMRE. They hope that by further engagement with this process, they can assist in expediting it and ensuring focus is brought to any delays or administrative blockages that might arise.

Thando Lukuko of the South Africa Climate Action Network said: “SACAN recognises and appreciates the interventions outlined by the President to address the electricity, especially the decision to issue a Sec34 determination by the DMRE minister to realise the renewable energy capacity incl. storage in the 2019 IRP. These are positive steps to realising a more balanced energy mix for South Africa and reduce our reliance on fossil fuels. We caution against cutting off our nose to spite our face. It is our understanding that reducing the red tape includes reducing the lead of doing Environmental Impact Assessments, meaning climate change and environmental impacts will be sidelined. Moreover, there has been no timeline to guide this decision which exposes citizens to potential harm in providing electricity. Therefore, we must emphasise the importance of keeping the country’s carbon budget in mind as we endeavour to meet the current capacity constraints.”

Francesca de Gasparis,the director of the Southern African Faith Communities Environment Institute, noted:“Effective planning for energy means South Africa will see an acceleration of procurement of least cost and quick-to-install energy onto the grid, which will mean electricity users will have more reliable and affordable electricity. If done right, that will set us on the road to a just transition. Energy procurement modelling without biases added shows that renewable energy is far and above the least cost and quickest energy system to install during an energy crisis. Additional investment in fossil fuels at this stage, such as gas or nuclear, in this energy crisis, will be a costly mistake that South Africa can ill afford after decades of mismanagement at Eskom, corruption and poor planning.”

Peter Becker, spokesperson for the Koeberg Alert Alliance, added: “Rapid rollout of over 13GW of renewable energy capacity within two years, which this determination will enable, would make the 1.8MW contributed by the Koeberg nuclear station insignificant by mid 2024, which is the end of the design lifetime of the plant. However, in the current crisis, every MW is needed, which is why Eskom plans to take each unit offline for over six months in the coming 18 months for life extension refurbishment seems misguided. That is likely to result in further electricity short falls and load shedding with a cost of billions to the economy,” concluded Becker. 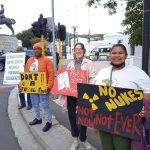 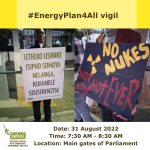